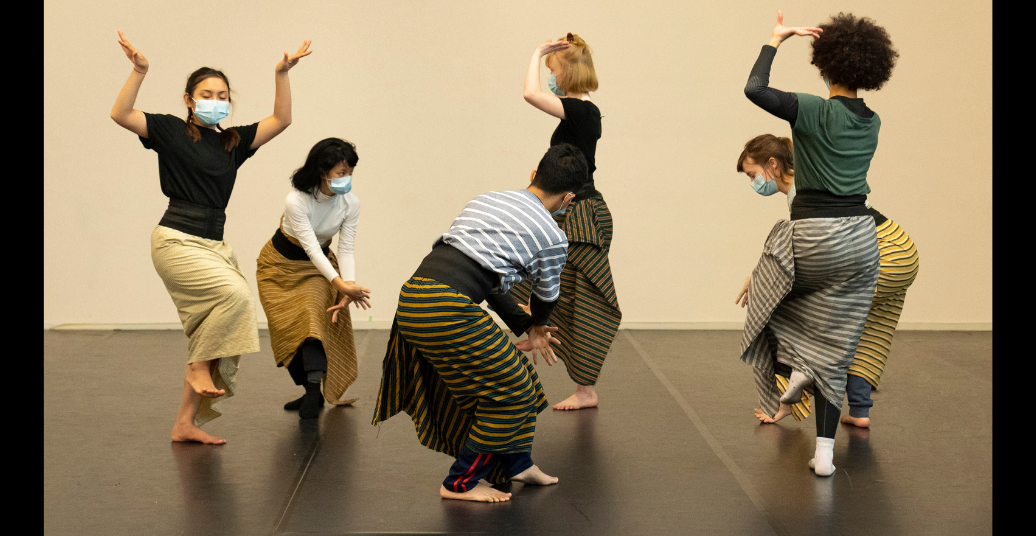 “Bee Dances” by Indonesian choreographer ninus and Berlin-based choreographer Kareth Schaffer, online from 10 to 23 June 2021 for Open Spaces – Making It Happen #2 by Tanzfabrik, offers choreographic thoughts on what it means to create a dance piece together from within a cross-cultural perspective. An ensemble of six international dancers (including both choreographers) performs an hour-long piece in which they become a hive with elegance, softness, and a sense of love for dance as an extensive communication system.

Conceived as a live performance but first presented digitally in February 2021 due to pandemic restrictions, “Bee Dances” is a recorded live piece rather than a dance made exclusively for the screen. I kept that in mind while watching it. In fact, I found I was able to focus my attention on the overall structure of the piece and I didn’t feel that kind of pressure that always shows up somehow whenever I watch a screendance piece (although I do love those too!). I found that there was a kind of lightness to the gaze, in line with the gentle, but, at the same time, compelling atmosphere of Schaffer and ninus’s choreographic composition.

There are two main sources that inform the project: the first is “Oleg Tamulilingan” (1952) by Indonesian choreographer I Mario — a Balinese love duet between two bumblebees inspired by the classical ballet “The Sleeping Beauty” and accompanied by gamelan music; the second is the ‘waggle dances’ involving rich, circular and octagonal movement dance patterns performed by worker bees to communicate to other workers the distance and direction in which flowers, pollen, nectar, and water can be found.

From the very beginning, “Bee Dances” appears to be a structured and measured mechanism. Two dancers (Schaffer and ninus themselves) present the piece verbally to the audience, giving precise historical insights into not only their sources of inspiration, but also the choreographic process and the structure of the piece. ninus begins by speaking in Balinese and Schaffer in English, but at a certain point they switch languages. These woven voices create, from the very outset, a dance of intertwined sounds that recalls movement patterns borrowed from bees. The stage design is clearly evocative of a hive, but also of a possible playground, open to the agency of the multiple dancers, each dressed in soft clothes, and which later transform into Balinese-inspired costumes.

“Bee Dances” offers a multimodal choreographic structure, from solo to duet and ensemble, and even taking in a reconstruction of a traditional Balinese duet. I find it compelling to see how the gestures can always be read on multiple levels — for instance, the hand gestures recall both the movement of bees and Balinese dance. A particularly fascinating moment for me is when, after the various circular dance pieces, the six dancers gather together centre-stage, reminiscent of a historical family portrait. It is an image that takes me back in time. After a vocal sequence, they become bees with rapid movements of the eyes and head, hands vibrating. The final reenactment of the “Oleg Tamulilingan” duet is preceded by one of the performers being dressed in a traditional Balinese dance costume by the remaining dancers as worker bees. Their actions, skillful and accurate, recall the worker bees being projected onto the onstage screens.

Bees are collective animals and cannot survive alone. Schaffer and ninus try as hard as they can to express the necessity to ‘work together physically’ despite the current pandemic restrictions on making collaborative art — in order to exchange methods body-to-body rather than digitally and to bring all their collective physical knowledge to the dancers’ hive as a source of nourishment. With these multiple inputs the choreographers highlight the extent to which choreography can be considered as not just a transcultural heritage, but rather a necessary critique of the cultural appropriation made to reach it. By acknowledging the sources of inspiration of the dance and their legacies — both Balinese dance and bee dances —  this work enacts a cultural experience for an expanded communities of spectators and performers. It turns an act of stealing into an action of re-giving. “Bee Dances” asks: How can choreographic processes and creative movement patterns be agents for social transformation?

“Bee Dances” is available as a streaming video until 23.06.21, free of charge, on the Tanzfabrik Berlin webpage https://www.tanzfabrik-berlin.de/de/open-spaces-making-it-happen.