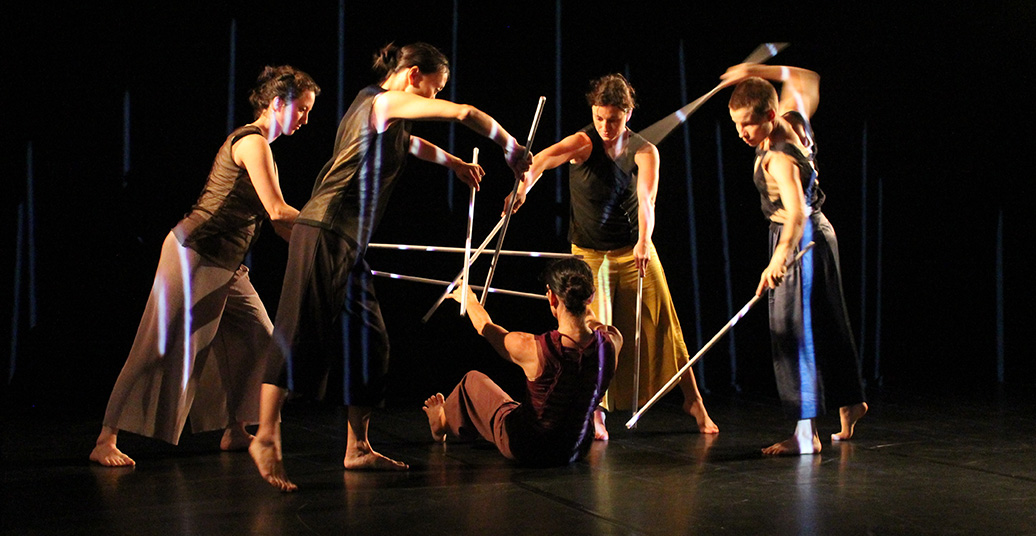 Under the direction of Nadja Raszewski, “objects” at TanzTangente turns viewers into part of a puzzling interactive trip to spaces where natural and manmade systems clash.

Even before everyone has found a spot in the courtyard of TanzTangente on Ahornstraße in Steglitz, it begins unexpectedly and soundlessly. A dancer walks up to stray viewers, takes them by the hand, and lets them go at another spot in the courtyard, which is covered with sculptures of orbitals in various colors and sizes. Five more dancers come running in. They float around the sculptures, within the limited space surrounding the sculptures, around the viewers, they disappear and reappear. Some viewers evade the dancers’ erratic movements. Smaller and larger planetary and atomic systems steadily form. And before they can reveal a meaningful whole, they once again diverge. The constantly purposeful movement intended to create order in the chaos of forms, lifeforms, and materials fails every time and starts anew.

During this first part of the evening called “sobjects”, whose objects and installations were created by Dorothea Fischer, the audience is guided from one station to the next. Without any notice, simultaneously triggering curiosity and disorientation. First, a room with a stick structure, which recalls a spiderweb or laser network. Then another room, with images that could just as easily be of nature or outer space. This spatial uncertainty accompanies the entire piece. In the background, poem quotations from German-American theoretician Hannah Arendt resonate: “I too dance, in ironic glance.” The words “floating” and “heaviness” repeat themselves. Arendt’s poems ask no intellectual questions and offer no answers for humanity. They serve as attempts to give their personal perceptions a tangible space in the universe. Even if this space often holds a palpable, but not tangible emptiness. “Objects” makes precisely this puzzling emptiness palpable, especially in the moments when neither the viewers nor the dancers are together in the same place.

In the second part, upstairs in the studio, the viewers are no longer active. They witness closeness and distance conflicts caused by the movements of the dancers, not just with one another but also with objects (once again symbolized by sticks) with their formative and limiting geometry. The objects control the people or confine them. When possessing them, the dancers either seize or lose power or become objects themselves. The electronic music flows into classical music. The lines and lights are never too sharp. Nothing really seems “hi-tech” or from a speculative future, it’s rather about the now.

There’s no concrete answer as to what part of the science fiction film “Ex Machina” by Alex Garland – as advertised – inspired the piece. Most likely it was less the myth about artificial intelligence, which turns either machines or people into evil gods. Perhaps it was the final scene in which a machine found its deliverance by recognizing itself in another machine. In “objects” there is a lot of friction on the stage, a lot of suspense between a desire for contact and a desire for more space, which doesn’t necessarily translate to more freedom. However, at the very end, the dancers exit a constrained living space demarcated by a square, not individually and alone, but in pairs.