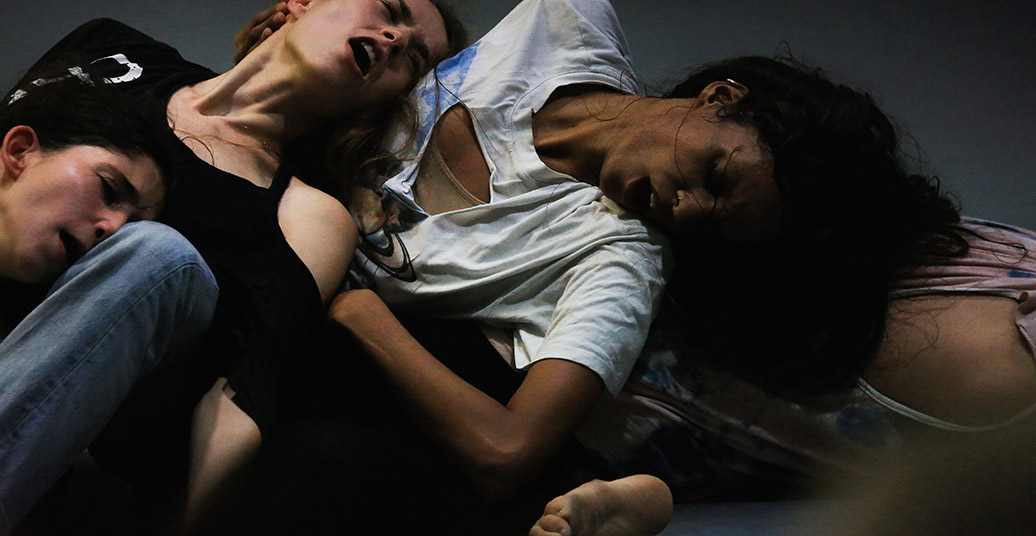 As a finale to her four-day workshop, “Practicing Empathy”, Yasmeen Godder is showing her eponymous piece – a group ritual, which shows us that we must now urgently consider what empathy might mean – during the SUBMERGE Festival at Lake Studios Berlin.

We gaze into an empty, white studio. Two dancers are standing upstage at a distance from one another, silently waiting, quietly breathing. As they begin to move, three other dancers appear in our field of vision, which is guided by multiple cameras. Four dancers encircle a fifth, lift her together above their heads, and carry her through the space. We now also see the sixth dancer, who is standing far removed from the group and watching them. Now she, too, is surrounded, raised up, and twirled in a circle high above their heads until she drops and is gently caught. This repetitive ritual of encircling by the many and the collective exposure of the individual reminds me of a group therapy trust exercise. Is trust a prerequisite for empathy?

The dance-like movements are accompanied from the start by vocal – but not verbal – articulations. This polyphonic, ambiguous vocality occasionally crystallizes into singing –  its rhythms converging, becoming faster – much like the physical movements become increasingly more ecstatic only to once again subside into silence and motionless persistence. Sounds are suggested, incorporated, continued.

Again and again, a dancer breaks free from the circular group formations. Another dancer reacts and brief duets emerge before a return to the ritual in the circular shelter. The dancers noticeably respond to the needs of the articulated body movements of the others, incorporating them, further developing the material extracted from them, but without coercion, without leveling differences, without adapting. Hinting at without co-opting. A sentence from Deborah Hay comes to my mind: “Your practice informs my practice.”

What initially gave the impression of a contemporary dance piece, now transforms into a trance-like collective ritual – one in which we, the audience in faraway Berlin, participate since Yasmeen Godder and her Company were not allowed to travel from Israel as originally planned due to pandemic-related travel restrictions. So though the workshop and the concluding performance still took place live, it was online with the help of Zoom and Vimeo. The second part of the performance – Practicing Empathy #2 – could not be shown until today since the audience was to be part of the collective exercise. Yasmeen Godder’s original project “Practicing Empathy” had to be repeatedly adapted to the ever-changing reality of the pandemic. This intrusion of reality into the artistic practice adds further complexity to her subject matter.

The synchronization of the dancers Ortal Atsbaha, Or Ashkenazi, Carmel Ben-Asher, Ari Teperberg, Tamar Kisch, and Nir Vidan with one another now works increasingly through the voices. Finally, Godder’s mantra “I want, I need, I fear”, which she uses as a tool for her practice, can be clearly and distinctly heard. Since we also worked on this in the workshop, it is that much easier to understand the states, which Godder’s dancers are passing through. The vibrations of their voices and the weight of their bodies are transmitted to us, and the heaviness of their bodies, the touches reverberate inside of us as if the dancers’ perceptions are contagious. As all six dancers lean against one another, intertwined, without falling backwards since they are holding each other up, verses from a Rilke poem come to mind:

“Thus all doth fall. This hand of mine must fall

And lo! the other one:—it is the law.

But there is One who holds this falling

Infinitely softly in His hands.”

Even so: We’re in Berlin Friedrichshagen looking at projections on a wall of what is being experienced at this moment in Tel Aviv and captured by cameras. There remains a gap between us and the dancers – despite and because of all the breathing, their proximity to each other, and their intimate touches, they remain so unattainable and unapproachable. Because they remind us of everything that is currently forbidden in reality. As if they are in their own post-pandemic utopia, in another world where it is still, or once again, allowed to practice physical closeness. And thus the real external world suddenly seems even farther away, stranger, colder, like an even more intense counterworld since our reality in dance studios, bars, and clubs is still defined by distancing and contact rules.

The SUBMERGE Festival runs until 12 September 2020. You can find information on workshops and performances on the Lake Studios Berlin website.