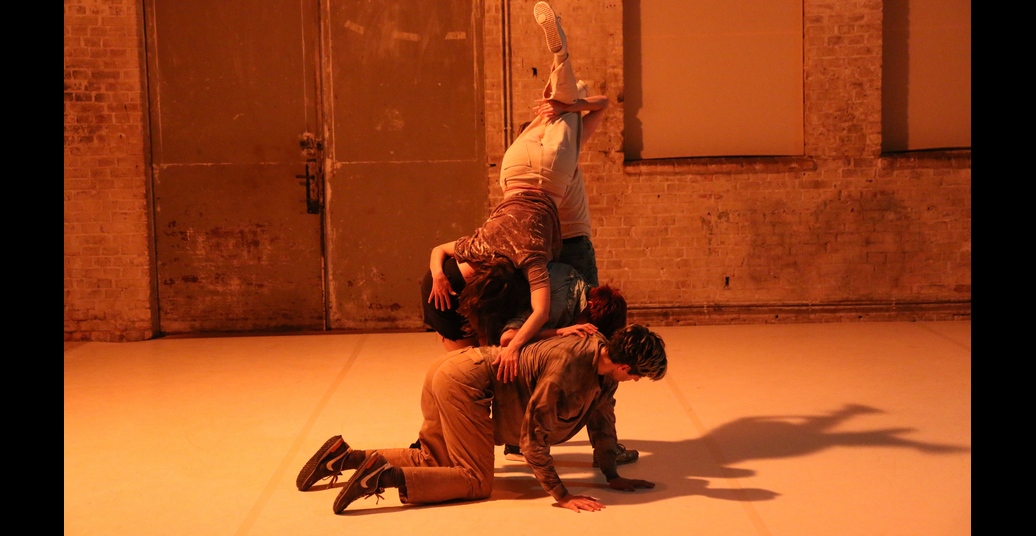 Perth-born and Berlin-based choreographer Emily Ranford premiered her most recent work “Forcefields iii” at DOCK11, 19 to 22 August 2021. This skilfully choreographed piece concludes the “Forcefields” trilogy, that explores, as Ranford describes in her programme notes, ‘a network of interdependencies endlessly morphing and curling on itself into previously unseen shapes.’ I searched for the missing link between the signifier and the signified in this piece, which, although beautifully performed, lacked dramaturgical deftness and emotional power towards the end.

I have always considered the programmes notes to be a crucial part of any theatre experience. Many spectators choose not to read them before seeing a piece, while others, like me, prefer to study them in detail before each show. Upon entering DOCK11, I hear the usher saying: “Unfortunately, tonight there are no programmes.” The show has already started and I sit down, clueless about what I am going to see.

Four dancers, clad in everyday clothes and generously lit from behind, slowly develop their choreographic patterns — each has their own dance vocabulary in the first part of the show. Juan Corres Benito’s elegant postures and sudden bursts of power, full of balance and cool vigour, remind me of William Forsythe’s earlier works. Georgia Bettens’s hasty head kicks and angular arm movements are filled with anguish, and have me recall Mathilde Monnier’s “Publique”. With impeccable pacing, the rhythm of their steps is broken as they fall into a more energetic flow, bouncing up and down in angled positions. The second chapter of the show sees the dancers cautiously forming duos, trios, and finally, a group of four. The third part celebrates the union of the four performers in a string of complex episodes: first, they push each other against the walls, then they carry one member of the group aloft on their necks and shoulders before sliding them gently back down to the ground. Though aided by Bogdan Licar’s clever soundscape and Daniel Paiva de Miranda’s rhythmic and attentive light design, the dancers approach exhaustion as the final scenes, which require solid stamina and prowess, visibly wear them out.

After the show, I keep asking myself what it was that moved the dancers in these group scenes. What was the agency that kept pushing them forward? Was it a feeling of care or aggression? Or was it part of their formal research into forcefields, which, as the title of the piece suggests, was the focal point of Ranford’s reflection? Back home, I find an online copy of the programme notes in which the choreographer unpacks her creative ambitions: ‘Forcefields iii is a materialization of the need of understanding and actively digesting the surrounding environment, transforming the traffic of expectations and pressures into a distinctive protective field.’ This cryptic text left me even more puzzled before I finally worked out that what I craved, in the end, were emotional cues — cues that would guide me to a fuller understanding of the protective quality of these ‘forcefields’.

On a wider scale, Ranford’s piece made me reflect on the importance of dramaturgy in contemporary dance. The dance dramaturg’s functions, though widely debated, such as in Bojana Cvejic’s “The Ignorant Dramaturg”, arguably remain essential in establishing the link between what a choreographer wants to say and what the audience sees on stage. A human body, with its long limbs, multiple joints, muscle twitches and general imperfections, cannot unambiguously portray complex theoretical concepts, such as those developed in the first stages of a research process. In this case, a dramaturg may step in and suggest using different media to complement the show, or amend the pace of the piece. Ranford explained to me in an email conversation that, due to pandemic-related restrictions, they had had to cancel two weeks of rehearsals and ended up preparing the show in just five days. This obvious production roadblock might have contributed to what I felt was a lack of a dramaturgical link between Ranford’s complex theoretical ambition, and the rushed, although beautifully executed, final result.