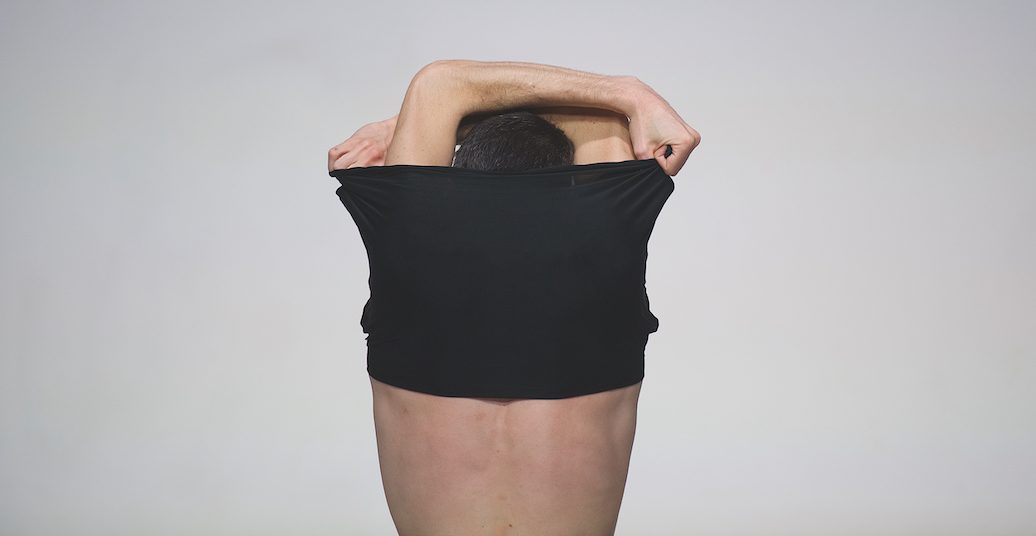 In “Assembly Instructions” (shown at Uferstudios 3 – 6 November 2021 within the framework of Tanzfabrik Berlin’s autumn season) Nir Vidan daringly disassembles his body into fragments, pieces, contours, and shadows. This black-and-white solo work is graphic, stark, and brilliantly paced. Thanks to his clinically precise performance and thoughtful dramaturgy, Vidan paints compelling and evocative images and avoids simplistic narratives. I quickly succumbed to the magic of his work and lost myself in this intense and meticulous experience.

Studio 1 at Uferstudios offers one of the most exciting and yet demanding theatrical spaces in Berlin — the white-tiled walls embracing the stage make me recall an emptied swimming pool — and tonight its whiteness, augmented by the stark and unforgiving light, feels cold and menacing. When I enter the space, Vidan is already present facing upstage and clad in a black t-shirt and a pair of shorts.

Led by Tomer Damsky’s percussive and intriguingly arhythmic musical score, the dancer begins to quiver. I am instantly struck by this vision of pulsating flickering as it takes over his fingertips and slowly reaches his shoulders, neck, and hips. Soon, with his arms crossed behind his back, Vidan begins pulling his black t-shirt up over his head. This slow-paced sequence is all the more compelling and graphic in the all-pervading whiteness of the studio space. The border between the black fabric and Vidan’s blueish-white skin drifts upwards, baring his lithe torso and swallowing his head. For a moment this scene makes me recall Xavier Le Roy’s “Self Unfinished” and its equally clever use of black fabric enveloping the body, but then Vidan smoothly moves my attention forward.

A series of strong images visibly portraying the disintegration, or, as Vidan explains in the programme notes, ‘disassembling’ of the performer’s body follows. Now we only see his back. His head remains anchored on the ground and hidden behind his shoulder blades. Tendril-like arms slowly appear at his sides to pull down his shorts. Vidan’s hands start moving his now bare buttocks sideways with brazen assurance. I catch myself thinking that Vidan’s head has been absent from my visual field for so long that the very notions of upper and lower body have been abolished. When Vidan’s left arm slowly appears from behind his back to take firm hold of his right foot, I completely lose any sensation of seeing ‘a body’ on stage at all. This body is now undone, fragmented. The dancer’s long limbs reach out to each other and communicate as if they are following their own script. His slender torso warps under the tension. Emma Juliard’s light design is cold and hard, yet occasionally warms Vidan’s steady exactitude with hints of amber and sudden blasts of bright red as his haunting dance score develops.

In the second half of the show Vidan’s ‘disassembled’ body — fragile yet full of quiet force — regains its paradoxically human verticality, and only his head and crotch remain veiled by the black fabric. This image is precise and candid. I feel that Vidan invites the audience to project their collective memory, desires, and, (why not) poetry onto the contours of the black-and-white assemblage of body parts that he explores on stage. As the music score progresses into dance beats, Vidan moves backwards to engage in a suggestive and enticing dance from the hips. With his back tilted against the wall, he sways laterally on his toes with his arms aloft. At this moment I start questioning the symbolic meaning of the black fabric covering only his head, neck, and groin. Words and cues rapidly run through my head: shame, play, guilt, gender-shift, joy. What is the metaphorical value of the body parts that are hidden here and veiled? And why do we tend to be so enthralled with the constant back-and-forth between masking and revealing? At the end of the piece, I realise that the ‘assembly instructions’ have been strictly followed: Vidan’s silhouette is now recomposed and upright. Although I find myself craving more when the lights abruptly go down, I am blown away by Vidan’s smart, immaculate, and thoughtful performance.

“Assembly Instructions”, shown at Uferstudios from 3 to 6 November 2021, is a restaging and development of Vidan’s choreographic research “Glass”, which was presented at Tanzfabrik Berlin in February 2020.