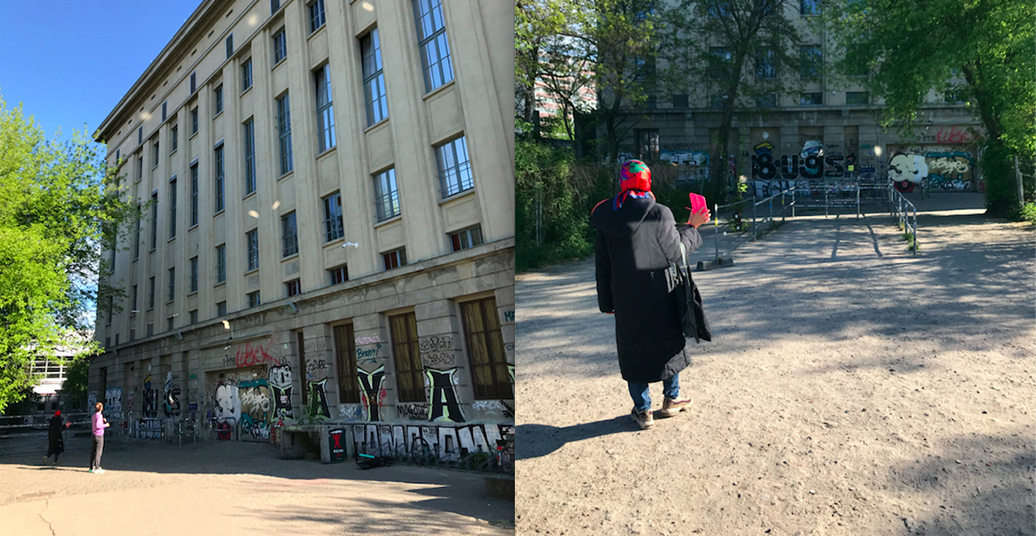 Ott & Agulló: “Reclaiming the live aspect of the Performing Arts in the current times” ©Carlos Sfeir
7. May 2020, Jette Büchsenschütz

On the opportunities for performance art in the age of the contact ban and why the shuttering of theaters can also be seen as an opportunity. Reflections on the festival “Reclaiming the live aspect of the Performing Arts in the current times” initiated by Felix M. Ott and Diego Agulló and supported by Tanzfabrik Berlin

More than in all other art forms, the effect of dance and performance depends on the physical presence of the performers, the co-presence of the audience, and the tangible expansion in time and space. However, during the pandemic, bodies are under potential suspicion. We’re suddenly forced to look at dance from a distance and in absentia. All alone, confined within our own four walls – and under stringent minimum distance regulations and event bans?

It almost seems as if some are resigned to performance, dance, and theater only being accessible as a digital happening in Berlin until the end of July at the very earliest. While many performers started providing video recordings and streaming at the very start of the contact ban, performance artists Felix M. Ott and Diego Agulló initiated the project “Reclaiming the live aspect of the Performing Arts in the current times” with the support of Tanzfabrik. In what began as a two-week conception phase at the end of April, ten participants (Diego Agulló, Urs Dietrich, Rosana Escobar, JOVENDELAPERLA, Oscar Loeser, Daniela Medina, Nina Barret Mémy, Felix Mathias Ott, Kiana Rezvani, and Carlos Sfeir) contemplated the question: “How to make performing arts during the current situation within the given possibilities but without relying on online formats?” The question of how and under what conditions and whether or not the works could be shown at all was intentionally left unanswered, or rather changed constantly over the course of the two weeks.

“The initial idea of the project was to reclaim that online streaming is not the only way to continue. I think it is problematic to accept that we live in a new virtual era and to accept that online is the new norm. There is a very important difference between translating an offline performance into an online stream and creating an online format from the very beginning”, Diego Agulló explained to me during a Zoom interview, which Felix M. Ott also joined.

Because the translation process, which Diego criticizes, is only a technical conversion process – like a conversion from Word to PDF. The performance content remains completely untouched. Felix M. Ott fleshes out these thoughts and insists: “I have absolutely no interest in translating performances that are intended to be live into an online context. Because I don’t believe that the atmosphere of a piece can be transmitted this way. On the contrary, I find it very inspiring to figure out how we can circumvent the current restrictions and attempt to continue working offline despite limitations. It seems entirely possible to me to consider concepts that deal with the situation responsibly. These are obviously balanced on a knife edge.”

What is meant by the vague but crucial word atmosphere becomes clear a few days later in front of the tangible Berghain. On an early Sunday morning in late April, when the sun is still far off in the east, we gather in front of the club’s doors, closed for an indefinite period of time – our public rehearsal stage for the day. Here, where there would normally be a huge crush of people at this time of the day, it is pretty bleak and empty. Around ten people are standing, crouching, or lying on the pavement and using different-sized mirrors to reflect the sunlight onto the neo-classical facade of the building, which is tucked in shadows. Their changing positions are dictated by the shifting sun. Blotches of light flit across a dark Berghain like a swarm of mosquitoes – sometimes tentative and reluctant and other times hectic – while white clouds drift over the flat roof. Suddenly, it appears as if the swarm of mosquitoes has found an entrance. On the fourth floor, at the very top and off to the right, a window is open. As if planned, all the flecks of light gather there for a moment to disappear one after the other into the blackness of the open window. The subtitle of the mirror performance is: “Keep in Touch without Touching”.

Thereafter, we take a walk along the Spree River where a second scene is taking place under a motto by Franco Bifo Berardi: “The effect of the virus lies in the relational paralysis it is spreading.” Water from the Spree mixes in our hands with the flour we brought along to form a  giant wobbly shape in which all the ingredients materialize as co-actors. Baking bread as a ritual to combat the loss of our social web of relationships?

But why not use this compulsory hygienic break to pause and escape from the neo-liberal pressure to produce, a pressure which is also prevalent in the art scene? Do nothing, Bartleby’s “I would prefer not to” virtually the most radical form of protest? Felix objects: “I initially saw huge potential in the vacuum. But I quickly realized that this vacuum did not leave me personally in a creative state. It felt much more important to me to process the current situation artistically, and in so doing reclaim a piece of personal responsibility. At the same time, I sense a kind of weariness with authority. Muted compliance with the order to stay home doesn’t seem to me like a solution for the situation. I consider it far more important to question authority. I’m talking less about the regulations imposed by the contact ban and minimum distance than the restrictions that prevent us from doing our jobs. Our art form is live performance. Dance in particular requires physical presence. As dancers and choreographers we are primarily concerned with contact – so precisely that which is currently being most strictly limited. In order not to get lost in our work process, we as dancers and choreographers are constantly looking for limitations. I wholly enjoy them in the artistic field, but as a private individual I also have my issues with them.”

Doing nothing in protest is also not an option for Diego: “I think art becomes even more valuable during times of crisis. This might be the right moment to claim that art is as systemically important as being a doctor or a nurse. Art is an essential profession, also because we are the experts on uncertainty.” Diego, like Felix, sees an opportunity in the substantial restrictions: “Maybe artists have already been too comfortable inside the institutional frame of a theater. Maybe it is time to get out of the comfort zone and to rethink what it means to have an audience. I don’t regret that theaters are closed.” So art as a special crisis management strategy, one which is urgently needed in light of this current crisis unleashed by an unknown virus? The poetic relevance for artistic action lies above all in its performance as a practice. A practice, which it is all the more urgent for us to reclaim and update right now – along with the risk of failure. At any rate, Diego’s comment is also understandable: “I want to reclaim the poetic power of art not the productive aspect of it.”

Urs Dietrich’s solo, which I was able to watch on Sunday afternoon from a distance at the open door of the rehearsal studio, will unfortunately continue without an audience for the time being. It is actually conceptualized as  a kind of loop performed in front of four audience members at a time, viewing in rotation. The 61-year old dancer Urs Dietrich moves in a clinically pristine, staged studio space, his face and his protective wear pale gray, his mouth encircling a tube. His futuristic-seeming movements appear to be testing out his environment. A post-pandemic body, which no longer knows its space – a standard-sized isolation ward – no longer trusts it, and can no longer touch its boundaries.

Felix M. Ott and Diego Agulló are also planning a small publication on “Reclaiming the live aspect of the Performing Arts in the current times”.