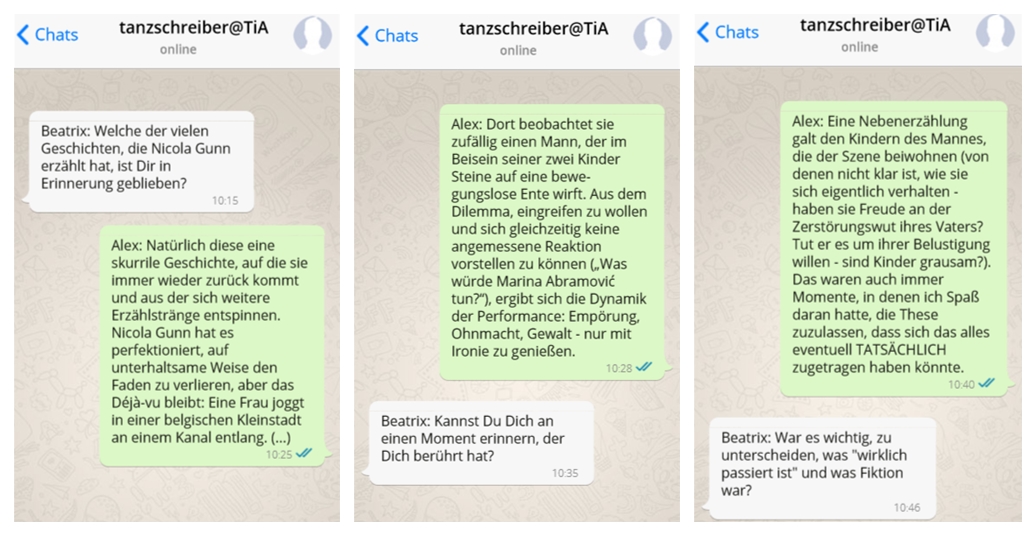 In their first review the tanzschreiber authors Beatrix Joyce and Alexandra Hennig chat about Nicola Gunn´s performance. A report about humour, ducks and throwing stones.

Of the many stories that Nicola Gunn told, which one has remained in your mind?
That quirky story that keeps coming back, of course, from which other narratives unfold. Nicola Gunn has entertainingly perfected losing the thread while retaining the déja vu: a woman jogs along a canal in a small Belgian town. By chance she sees a man throwing stones at a motionless duck in the company of two children. The dynamic of the performance results from the dilemma of wanting to intervene but not being able to imagine an appropriate reaction (‘What would Marina Abramović do?’): outrage, powerlessness, violence – to be taken with a pinch of irony.

Can you remember a moment that was touching for you?
One side story is about the man’s children, who witness the scene (and of whom it isn’t clear how they actually behave. Are they enjoying their father’s destructiveness? Is he doing it to amuse them? Are children cruel?). Those were also moments I enjoyed admitting that perhaps everything could ACTUALLY have happened.

Was it important to distinguish between what ‘had really happened’ and what was fiction?
No, not really. It was clear that this story was choreographed fiction – text and language interlocked down to the smallest detail. But some stories are too absurd to have been invented.

What do you think was the connection between the movement and the text?
I had the impression that both strands had been composed independently of one another. As if the performer was able to play a multi-instrument, juggling facial expression, gestures, language and movement independently. This had a quality, but at the same time it exhausted itself for me rather quickly. The moments kept receding behind the story.

In what way did the piece surprise you?
I must admit that I was waiting the whole time for a ‘deeper’ truth, some kind of philosophical meta-level (in the form of a revelation about the shortcomings of humankind, perhaps!?), OR I was more expecting the whole thing to take a new turn, to become deeply sad or really disturbing. There was a surprise at the end – Nicola Gunn’s appearance as a duck – but I would also have liked her to be the stone-throwing choleric – which of course would have been too much 😉

Thank you, that’s it! PS: I just realised that your icon on my Google drive is a goose! When speaking about ducks, how funny is that?!