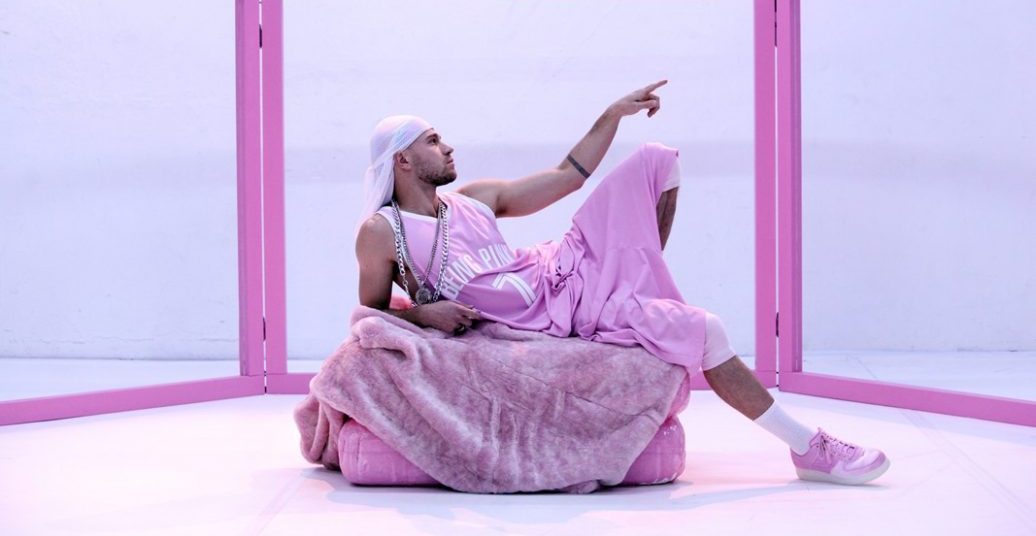 In “Being Pink Ain’t Easy”, Joana Tischkau gleefully stages gestures and habits of exaggerated masculinity derived from US rap. In the context of this year’s Performing Arts Festival Berlin – still available online until 3 June 2021 – Sophiensæle is showing the successful cinematic product of this previously live performance, which addresses white masculinity by citing Black culture and through conscious clashes.

Speaking constructively about racism is like a muscle that we as a society have not yet trained, writes anti-racism trainer and author Tupoka Ogette. Similar to Tischkau’s last piece, “Playback”, which was invited to Tanzplattform 2020 in Munich, “Being Pink Ain’t Easy” provides an excellent opportunity to engage in a constructive dialogue on racism. Starting with the question: what kind of person is this white German cis man who identifies so strongly with hip hop and its culture that he has become a quasi-recognizable figure – at least to people of color – Tischkau astutely tackles the phenomenon of social construction at the intersection of race and gender.

The impressive solo performance of dancer Rudi Äneas Natterer, clothed entirely in pink and white, is an eclectic mix of vivid quotes. The baggy basketball shorts and the oversized tank top combined with the thick silver chain, rings, tattoos, and the shiny du-rag, originally an African head-covering, create the image of a 1990s 2000s rapper. The cultural and historical references of the piece range from distinctive poses from the music videos and album covers of famous Black and white hip hop artists to iconic pictures from European art history, such as Michelangelo’s David and Roman statues. Without a doubt, a powerful masculinity is being intentionally constructed and staged in a pink monochrome spectrum, both humorously and with a well-devised aesthetic.

What is most remarkable is that the performativity of gender and race is not rattled off on the body of the supposed “other”, which Joy Kristin Kalu, dramaturge and curator at the Sophiensæle highlights during a follow-up discussion with Joana Tischkau during the CLINCH Festival, where the piece was also shown in May. Presenting and parodying the construction of social categories on a white cis man is an exciting approach to uncovering the mechanisms of appropriation inherent in this dominant position. The fact that Joana Tischkau, a Black woman, moved and staged this white male body plays an important role with regard to the authenticity of the work and the empowerment of Black artists.

Can a white audience understand?

Is this construction even recognizable to those who unknowingly perform themselves?

On the one hand, there is already incredible value in not necessarily addressing a dominant white society, but instead appealing to a queer Afro-German audience. On the other hand, the production can be a productive prompt to reflect. Personally speaking, it made me more aware that I, as a cis white woman, only have a certain and, most notably, privileged glimpse of things. I completely associate the pink hair straightener, which the performer uses at one point during the piece to deliberately heat up white bread and bacon, with US American beauty norms, and the absurd repurposing of this object is a highlight in and of itself. However, there were some parodies that I didn’t understand or even notice. Perhaps because I don’t know the original references they are associated with in the hip hop scene, but most likely and primarily because they don’t have much to do with my own experience of the world. This kind of critical self-reflection is an important starting point for a constructive discussion on racism: becoming aware of one’s own privileges and listening to others’ experiences. In this sense, finding Joana Tischkau and Joy Kristin Kalu’s discussion on “Being Pink Ain’t Easy” online, and being able to conduct my own racism critical muscle training using their contextualizations, was incredibly enriching.

Discussions about art can be controversial – especially when they relate to sensitive topics like racism and masculinity – but they are a productive moment in social life. During a follow-up discussion, Joana Tischkau mentioned that her work has provoked entirely mixed reactions. White and Black viewers alike were confused or felt attacked at times. However, talking with one another about these sentiments is exactly the constructive exchange that we need. Artistic works like “Being Pink Ain’t Easy” demonstrate that this confrontation can not merely be for aesthetic enjoyment. It is also capable of cleverly training the collective muscle and society’s movement competence. So hop on the (mental) weight bench. Tupoka Ogette’s predicted sore muscles are worth becoming truly strong as an individual and a society and moving beyond the simple performance of masculine stereotypes.

“Being Pink Ain’t Easy” is a production by Joana Tischkau in co-production with the Sophiensæle, the Munich Kammerspiele, and the Künstlerhaus Mousonturm as part of the Tanzplattform Rhein-Main. It was shown online in late May 2021 as part of the Performing Arts Festival Berlin. The film is available via the Sophiensæle as video-on-demand on the external online platform dringeblieben.de until 3 June 2021, 11.59 pm.