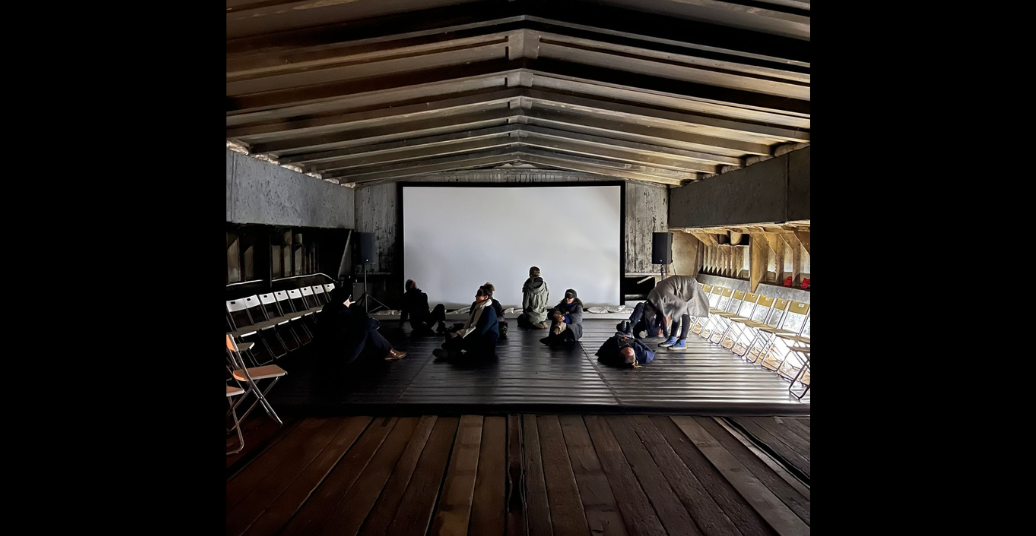 What happens when we peer into the violent void? Based on extensive artistic research, Min Yoon‘s “Dancing with Violence” shown at Hošek Contemporary on 12 November 2022 invites us to “evolve the perpetrator and victim archetypes” and glimpse at the atrocities around us.

Butoh dancer, interdisciplinary artist, and researcher Min Yoon’s “Dancing with Violence” certainly promises a lot. This participatory choreographic work and audio experience takes place in the bowels of the Hošek Contemporary’s ship – the MS Heimatland – as an exploration of violence based on memories drawn from ‘Dancer Anonymous’, a subject from the artist’s workshops. A sense of anticipation builds as we are led blindfolded in a human chain down to the hull of the ship, where our exploration of the darkness of human thought begins.

Min’s artistic research focuses on the archetypes of victim and perpetrator, and the piece attempts the bold mission of unfolding these archetypes via a sensory experience filled with contradictory binaries and heavy poetic imagery. After being settled in our own space, invisible to each other through blindfolds, a recorded voice begins with a warm welcome, before plunging straight into the piece’s central oppositions — those of victim and perpetrator, of calm and agitation, and of cure and poison. The audio openly declares the piece’s ‘immunising’ objective – we are not here to be re-traumatised, but rather to take a small, protected glimpse at atrocity, in order to protect us from its horrors.

To this end, we are invited to take a new (metaphorical) ‘Pharmakon’ antidote (probably referring to the Ancient Greek word meaning both ‘remedy’ and ‘poison’, although Derrida’s reference to the philosophical notion of indeterminacy would also somehow fit), to alter our sensory experience and allow us to “feel the pain and dreams of another”. Guided by four voices, we travel through seven worlds, each gesturing toward Butoh’s emotional binaries of creation/destruction, chaos and order, accompanied by Wieland Möller’s ritualistic and sometimes industrial sonic interventions. The physicalisation of emotional states – such as accusation, voids, fists, baseball bats, and the ‘pose of the protector’ – shield us through the horrific psychological terrain, which is at once calm and agitated.

As we proceed through the various transformations and permutations of the body, shifting our selves while trying not to bump our neighbours, it is hard to shake the feeling that something is missing from “Dancing with Violence”. The artist’s obviously careful research takes us through metaphors of abuse and aggression mediated by Butoh’s carefully neutral and calm observation on the explosive phenomena of existence. This approach sits somewhat uneasily with the conflict-resolution objectives of the piece, and the worlds opened up seem to carry a sanitised, meditative sheen, as though unwilling to quite open the floodgates.

Perhaps this is an inevitable characteristic of works dealing with violence as their subject. There will always be something to dance ‘around’ rather than ‘with’ – something that is not-quite-touchable, difficult to look at directly given the sheer horror of its definition within the frame. This is an interesting conversation, and one of which “Dancing with Violence” is perhaps also conscious: its mix of testimonial and instructional modes seem more directed to opening a void for thoughts, feelings, and impulses than a direct encounter. In this way, it is the opening of a space, an invitation that stays inside an elusive, liminal plane, taking violence as a companion.

As we take off our blindfolds off towards the end of the piece and I gaze into the empty eyes of my neighbours for the first time, a curious sense of nothingness pervading the hull of the boat, as though the dank atmosphere inside has taken hold of us. “Dancing with Violence” is in some ways a difficult journey to love, and yet, hints of the extensive artistic research are inside the carefully-placed signposts, even if it doesn’t deliver in an emotionally-satisfying way that we might be used to as consumers in an economy of pleasure. That this condition anyway excludes large swathes of human experience may give “Dancing with Violence” its political resonance, as it offers powerful, tense space for emotions, feelings, and images that may be otherwise taboo or unacknowledged.

“Dancing with Violence” by Min Yoon was shown at Hošek Contemporary on 12 November 2022. The online premiere is on 1 December 2022 at dancingwithviolence.com.