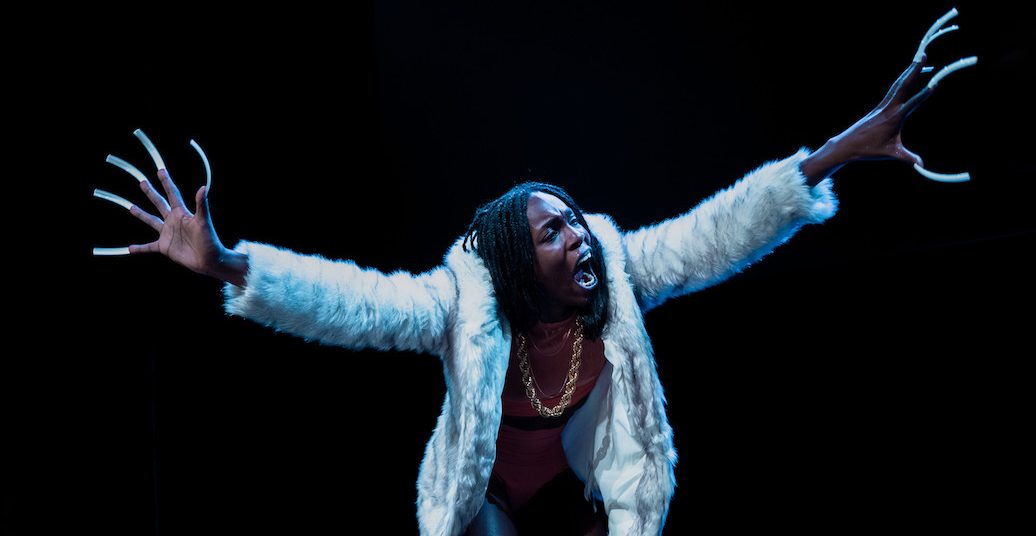 “blackmilk:trompoppies” by tiran and “JEZEBEL” by Cherish Menzo, both part of Queer Darlings 3 at Sophiensæle (1 to 13 March 2022), seize archetypal figures and modern icons to unpack their origins, reorder the narrative on gender, sexuality and race.

After hours of mulling over this article, I finally figure out how to begin. There is no other way to do it. I have to expose the racism within me. The story begins a long time ago in India, a post-colonial nation where colourism is prevalent. At age 15, I was finally beginning to come to terms with my own skin-colour. I had spent years hating it, often wishing to magically wake up fair-skinned. Realising this was never going to happen, I tried the opposite route. Many evenings were spent dancing to songs on MTV and trying to copy the moves I saw. I memorised and mouthed the lyrics — words about things, people, lives, and a community that I knew nothing about. Missy Elliot was my goddess and I tried to shape myself into her image as she rapped:

I got a cute face, chubby waist
Thick legs, in shape
Rump shakin’, both ways
Make you do a double take.

He is running. Running around the entire circumference of the stage at the Sophiensæle’s Hochzeitssaal. Running, and then running some more. It’s been a whole song and he is still running! I have to count now — during the second song, each lap took him 18 strides. As I sit and think about how I will describe this moment in this article, sentences that classically stereotype the Black male body unfurl dangerously in my mind. His long legs, propelled by his “natural athletic ability” carry him across the room in effortless strides — even though the effort is visible on his face. I keep counting so I will be able to inform the reader that South African performing artist tiran continues running laps for a third song. By the end of it, he needs 22 strides instead of 18 to cover the same stage circumference. Why is tiran running? What is he running from? Must he run for some specific reason? There are plenty of reasons. I can imagine some of them just from taking a quick glance as the latest news.

The light design and scenographic elements in tiran’s “blackmilk: trompoppies” pushed my body to heightened alertness and a sensorial state of emergency. Right at the beginning, a white light shines into our faces at regular intervals. A few in the audience shade their eyes until the interrogative light stops blinking. My pupils contracted, I peer into the darkness and hear a long ominous hiss. When my eyes adjust to the dim light, I see a cloud of thick white smoke slowly rolling in the audience’s direction. It engulfs my face.

When the air clears, a cluster of microphones stand mutely in the centre. tiran stands among them speaking inaudibly. He jabs the air around him with various hand gestures — some of them recognisable from US American rap music videos. He makes that familiar ‘yo’ hand gesture with index finger and pinkie finger aloft, then his fingers continue to express with subtle variations in gesture. The programme notes also mention that the hand gestures come from the choreographer’s research of an Afrikaans formation dance performed by drum-majorettes. Even when tiran raises his voice, his words are still drowned out by a tirade of songs that I don’t recognise. I want more than anything to hear his voice. Right until the very end, tiran’s performance appears to be designed to test and challenge the audience. Even as we perform our habitual docile role of an applause, he seems to want to jolt us out of our stupor by giving us a little bit more.

Walking down Sophienstrasse that night, I recall what tiran’s words were when we were finally able to hear him. “Now you see me. Now you don’t.” True enough, I think. Black lives might matter on Instagram, but Black and brown-skinned people are still discriminated against as they attempt to flee Ukraine amidst the ongoing war.

I surmise my reflections by writing my very first rap song. Dear reader, please indulge me and read the following aloud as if you were rapping. Punctuate the commas, hit the air around you, imagine a cheering audience. Just do it!

Rap brought me love for rhythm n’ rhyme,
What I know of that world, as yet a dime.
Perceiving race, still a matter of convenience,
Sister — there are shades in experience.
A Black girl is a Black girl. A Brown girl Brown.
Black man in Africa isn’t like one in the States.

What’s the weight of a word
or that of a phrase –
burden, crown, a question of debate.
I have so much to learn, a long way to go.
So I return and I listen.
’nother voice, another show.

The other show I return to, as part of Sophiensæle’s Queer Darlings 3, is “JEZEBEL” by choreographer and performer Cherish Menzo. Menzo works with familiar stereotypical images of Black women and distorts them in ways that I find to be a reclamation of these images. The setting itself is made uncanny with the choice of sound and light design. To me, it resembles a video game or Doja Cat’s planet. Menzo enters this blue-washed world as a ‘video vixen’, those hyper-sexualised women depicted in rap music videos from the late 1990s and early 2000s. Right from the beginning, she owns the centre stage. She takes her time to get there through skilled movements that are not bereft of satire. Instead of the male hip-hop artist entering the party in slow-motion, waving to his friends and to the girls by the pool, it is the vixen who is our star. She brandishes her symbols of power — an oversized fur coat, shiny metal chains, silver grills glittering over her teeth – as a celebration of her power and her right to it.

Appropriately auto-tuned for our times, Menzo raps parts of “Oochie Wally” by Nas and the Bravehearts. Her slow and careful repetition highlights the hyper-sexualised nature of the lyrics. In the moments that she isn’t rapping, composer Michael Nunes’s score brings a confident ferocity to the performance. When she begins to twerk, our Jezebel appears to enjoy it. In continuing to twerk for an extended duration, she makes the skill and labour of the so-called trollop, the accused tramp, visible. The long sequences of twerking also bring about a striking discomfort and consciousness of my own gaze. In my fascination and celebration of a music culture, have I too been party to disempowering Jezebel? Similar feelings come to the fore in another sequence when we see Menzo’s lips across the entire projector screen. Shining with glittery lipstick, they form an image that is familiar from popular music video montages. Rather than allowing the image to slip swiftly and comfortably away, however, Menzo pushes her audience to stay with it. As she raps another song, she reveals in graphic detail the contortions of her mouth, her delicate tongue repeatedly running over her artificially glittery lips, spit dribbling from the corners of her mouth. The grotesqueness of this moment exposes the bizarreness of the original video-montage image. How on Earth, I wonder, did pairs of blown-up lips become so commonplace and accepted in music videos?

“JEZEBEL” provokes many other questions in me by touching on other stereotypical Black female figures. Donning a large blow-up suit with conical breasts, somewhat reminiscent of Missy Elliot’s “Hip Hop Michelin Woman” look, Menzo becomes the ‘Bountiful Mother’. In another moment she transforms into the stereotype of the ‘loud angry Black woman’. In each of her transformations across genders, ages, and stereotypes, Menzo appears to address the semantic influence of the portrayal of women to us as passive consumers of culture.

Despite this focus on stereotypes, Menzo still seizes ownership of these portrayals. Be it Missy Elliot and Beyonce, or Nicky Minaj and Cardi B today, Black female artists in rap, hip-hop and R&B empower themselves and their listeners. Like them, our Jezebel has a voice. Her long acrylic nails painted white demand attention — they are her accessory and her weapon. It is her time.

I still like dancing to 90s and 00s music, but I know now that I’m not exactly the spitting image of the women these songs demean or celebrate. I am slowly coming into my skin. While I was just like everyone else around me in my place of origin, these days, suddenly, I am termed a Person of Colour. In a changing world where we attempt intersectional solidarities, I realise that introspection, unlearning and relearning are pleasures of the journey.

Watch the conversation between Cherish Menzo, tiran, Joana Tischkau and Joy Kristin Kalu POLITICS OF LOVE, #10 QUEERING RACE, dedicated to current strategies of staging and queering race through the works “blackmilk:trompoppies” by tiran and “JEZEBEL” by Cherish Menzo. Available as video on demand from 9 to 20 March 2022 on the website of Sophiensæle and under https://vimeo.com/684608761.

“blackmilk: trompoppies” by tiran and “JEZEBEL” by Cherish Menzo were shown in the third round of Sophiensæle’s spring series QUEER DARLINGS. The festival is running from 1 to 13 March 2022, download the QUEER DARLINGS 3 program here.