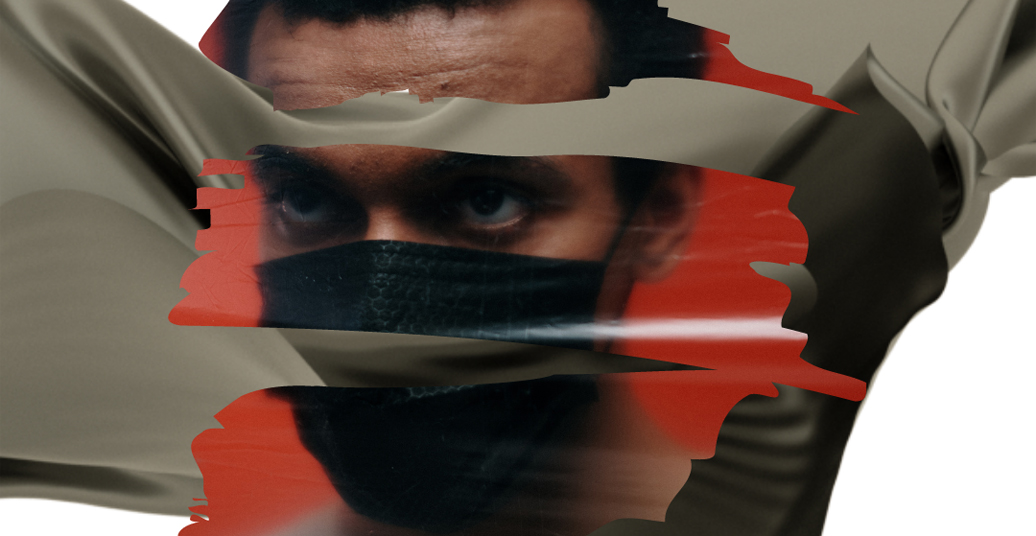 Rhea Ramjohn* reflects on the metaphorical and physical masks that shape our day-to-day movements and interactions. The “performance” of creating space for one another during the Covid-19 pandemic has brought physical distancing to the forefront, and has exposed what many marginalised people have long-known as the pandemic of being othered.

“You have to give them a ‘how you doing?’ or a ‘hang in there buddy’ so they feel like I ain’t no threat, you know? ‘Cause they can’t see half of my face now, with the mask. You know what I mean?” — my brother.

He is telling me about his mask — the mandatory face-covering that is just a half a millimetre thick, and stands between his health and utter loss. If he were to contract the Covid-19 virus, he would lose not only his breath, but also his strength and his job, and then his health insurance, and most assuredly, his visa. Complete and total loss. Such a half a millimetre can draw lines of power.

But there is also an incredible drawback to wearing this face-covering designed to save a black man’s life. No one can see him smile. No one can notice the beaming smile that matches the passionate arm gestures that he so effortlessly flings about. No one can decipher the half-sly grin he displays along with his sarcastic comment. No one can spot the pout he makes when attempting to look silly. Or the wide gape with dropped jaw he forms to momentarily confuse toddlers — he doesn’t want to devour them, but rather make them roll their eyes at his simple, yet effective humour. No one can see his cheeks, nor his dimples, nor the endearing gap in his teeth. Reactions to him in public — to his mere presence — have changed dramatically in the past six months, and he detects it every time someone comes within six feet of him.

It’s funny how a jolt of the arm becomes disconcerting when not paired with a smile. Or a ‘how you doing?’ seems somehow coded when lips cannot be read alongside it. My uber-gregarious brother is being brazenly reminded that he is continuously reduced to a societal construct. Before, his smile was enough to convince some to categorise him in other ways, calling him ‘friendly’, ‘unthreatening’, ‘mild-mannered’, or ‘polite’. Now, that half a millimetre diminishes him to nothing more than his race, gender, and size.

The curve of our lips and the motion of their spreading to reveal our teeth — in the same way, perhaps, that our animal ancestors would have snarled a defensive response — has been for a couple of centuries now a mask in and of itself. Specifically for us black and brown folks, who have navigated the waters of tokenism for generations, the smile and the show of physical deference to white folk is a loathsome burden; we continue to bear that double-edged sword in our fight for prosperity. W. E. B.  Dubois described it, in The Souls of Black Folk, which he began formulating right here in Germany’s Hauptstadt, as the ‘veil’ that hovers in our worlds; it marks our double-consciousness and exists to serve as our protective swaddling, long before we take our first breath. Our fight for rights, respect, and reparations has been, and still proves to be, detrimental to our ways of living, our celebrations, and our existence. The effort to diminish our true physical expressions, by masking anger, contempt, our sexualities, and even by editing the motions of our bodies, is the ancestral established code-switch mastered to ensure survival — or tolerance in the best of bets.

My brother keeps more distance now than ever before in his life. And he is sure to tilt his head to the left with squinting eyes as he waves from far enough ahead. He attempts to ooze approachability, while not moving around too much, making sure to say ‘hi’ loudly, before lowering his arm back to a dangling, palms out position.

The space that we are all now defensively carving out for ourselves in the name of hygiene, fear, and insecurity is an extension of a mechanism I had already perceived decades ago. I felt it when the German-speaking woman from Prague insisted that my mother and I be removed from her wagon on the train, and that our seats be disinfected. With the constant social chastisement about where I should belong, stand, walk, sit, bike, lay down, play sports, picnic, or exist in public. In the fact that I already made up my mind years ago that I would cross the street first and thereby stay out of the vicinity of others.

The pandemic has now graciously given us all a reason to respect one another’s personal spheres. However, with this shift in the Overton Window, we have also suffered immense loss. An elbow bump speaks volumes about your politics when compared to bumping fists or throwing out an unpracticed wave. Handshakes have been forgotten. Yet as I one-two-step around the shoppers in the supermarket aisles, I receive no reciprocal movement in return — which begs the question: Do my physical attempts to make and ensure space for others indicate the social cue embedded within it? A cue indicative of the new social contract to which we have all (at least generally) agreed to comply? I venture that, apparently, it has not. I constantly find myself being the only one who maintains the suggested physical distance. The one who most often has to move out of the way. Every push, every jab of an elbow, and every smack of a bag or shoulder smarts as if I’m invisible. I mostly suspect it is down to the fact that my body — our bodies — are not seen as worthy of a deferent one-two-step. Our space is given no reverence.

There is nothing tender about the way in which othered bodies are being approached. Masks, lockdown, and markers taped onto the floor have done nothing to inhibit the spread of the pandemic of ignorance and fear — or more specifically, the pandemic of xenophobia, racism, and misogyny — that we know today. On the contrary, it is though we are in some morbid Venetian carnival, where masks have unleashed the most predatory behaviours under an assumed inculpability, thanks to the presence of a half a millimetre thickness of textile.

So, how do we show them that “we ain’t no threat”? Or that we are not to be stalked or othered under some ominous pretence? In the measure of our lived experience, we have been long pulling at that veil. Ironically it’s been the putting on of the mask, by those without the unique predicament of double-consciousness, that has made the veil perceptible. Such a metaphorical millimetre can draw lines of power.