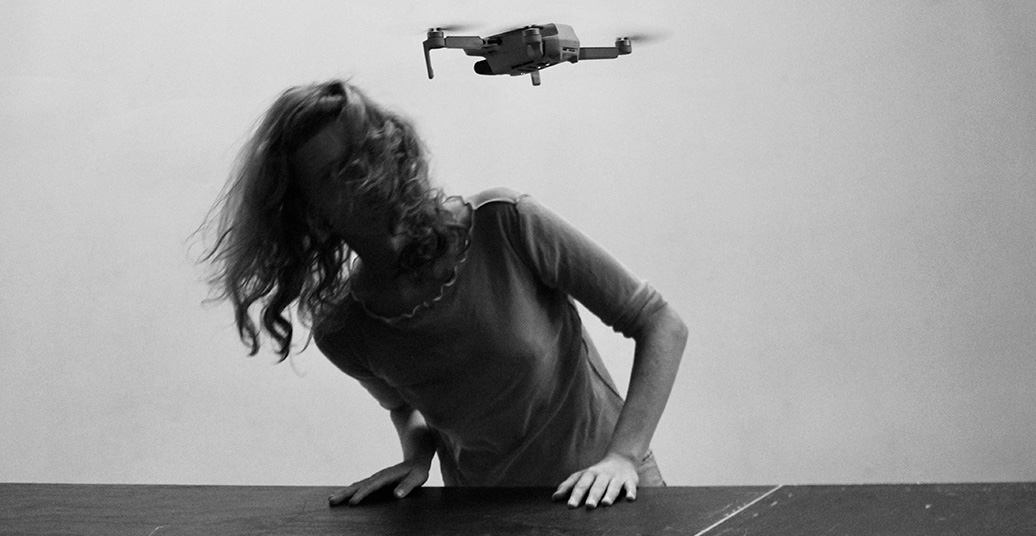 On 14/15 November 2020, Josefine Mühle is showing a video work on the ada Studio website as a teaser to the performance “LOTUS. the child was stung”, which has been postponed until next year. In this video work, she weaves aspects of prenatal psychology with our own fantasies into a lush dream landscape.

What is she holding in her lap? Is she protecting something? And what’s in her mouth that’s preventing her from speaking and making facial expressions? Her head repeatedly nods up and down. What is it she’s searching for in the dark? The first images from “LOTUS. the child was stung” already transport us to a mysterious and alienated dream world. Anyone who enters it is disconnected from reality.

Josefine Mühle’s work, available on the ada Studio website for two days, is neither a filmed performance nor a simple conversion of a piece meant to be performed live if rising infection rates hadn’t demanded a second lockdown. Rather, it is the aesthetic translation of a three-dimensional performance in a 15-minute two-dimensional video work. Just like the “dreamwork” (Freud), the result is condensed, fragmented, enigmatic – and re-assembled. What we see of the actual performance is a collage.

The filter over the images shades everything in a blue-violet shimmer and evokes associations with oceanic deep sea diving. The dissociation techniques make it hard to distinguish between surroundings and object: contours dissolve and flicker, a peculiar flatness emerges –and just as in our dreams, everything appears equally close and equally laden with significance. The melancholy, meditative piano music intensifies the otherworldly atmosphere. In a second scene, the performer sits upright in front of a video projector projecting a strange form, which I can’t decipher. Do I discern the outline of a placenta (which the title might be alluding to)? Shortly thereafter we’re staring into her wide-opened pink mouth, tongue sticking out, which evokes our cannibalistic desire for destructive assimilation. Next to it, mounted on a contrasting split screen, is a lily flower shape. Colored blue, it is reminiscent of a nostalgic motif from German Romanticism. What are we longing for? What can’t we express? The images, which Josefine Mühle stages one after another, inspire a yearning for a sense of security and symbiotic resolution. Fantasies of an “oceanic feeling”, as Freud called it: the desire for self-resolution and the associated pining for a return to the motherly ocean. A fantasized memory of an infant state, which does not yet know the difference between its own body and the “bundle of perceptions” of its environment? A longing for an intimate connection with the external world, which is generally suppressed by the manifestation of self-awareness during the transition to adulthood?

We float onwards through the blue-violet atmosphere as the image and sound change. A sharp, brutal whirring begins and I now realize what the performer had in her lap at the start of the video: a drone remote control. It is this surveillance drone, steered by Josefine Mühle herself, which is producing the obnoxious, whizzing sound and threatening to disturb the oceanic tides. Like a superego – our later internalized form of conscience, which constantly evaluates and punishes us – it appears to watchfully make its rounds over our dream content. However, it can also be interpreted as the real, encroaching interference of an inner world dreamed whole through prenatal diagnostics. Which is what the title “the child was stung” indicates.

Another instrument of invasive observation enters the image. Through a microscopic lens of sorts, we once again glimpse a non-identifiable something. The image dissolves and we see Josefine Mühle’s rear view. The screeching whirring starts up again and the film collage ends with a hard, brutal cut. Shocking, like a birth.

Similar to her last piece “A Child Has Been Beaten” (concept, choreography, performance: Suvi Kemppainen, Josefine Mühle), performed at Tanztage Berlin 2020 in January, fantasies and their psychoanalytic analysis are paramount to her current piece. Whereas the atmosphere then was even more emotionally charged and the stage at Sophiensæle (Kantine) immersed in an aggressive red-orange light – it revolved around the inextricable ambivalence of sadistic dominance and self-tormenting submission – the atmosphere here – fitting for this in utero space – is muffled, melancholy, clouded, and spherically circumscribed. The origin of the video piece “LOTUS. the child was stung” was a preoccupation with prenatal psychology and the question of the emergence of consciousness – after the “beforehand” as Josefine Mühle calls it. What happens in this in utero space? Why can’t we remember?

Part of the essence of the unconscious is that it never emerges into consciousness. Unless it does so unrecognizably, pixelated, in dreams, as a symptom of illness – or as a performance. Next year.