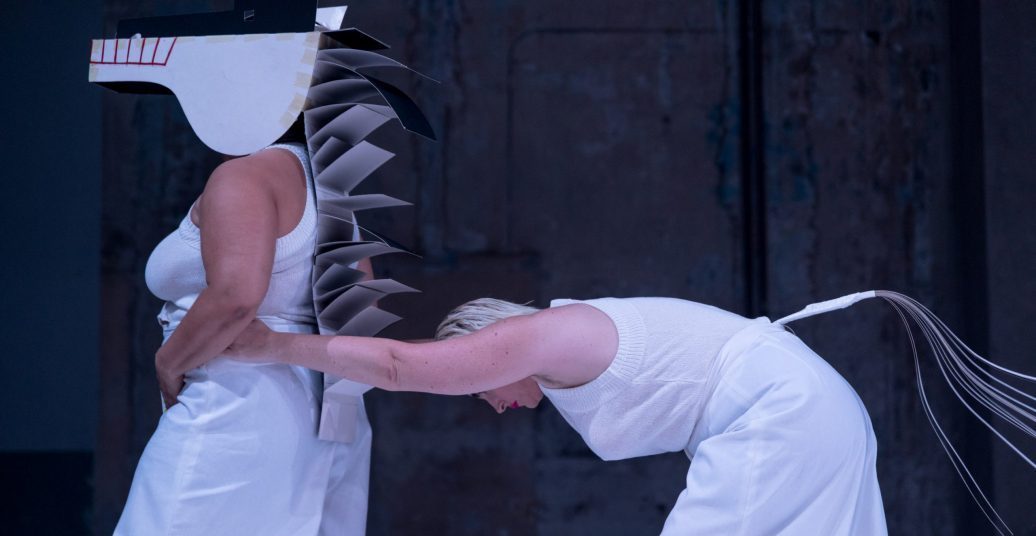 How do you start a show? How do you end it? How do you break the fourth wall? And what does it take to be two onstage in front of the audience of many? Plenty of theatre and performance makers have reflected on these recursive questions to uneven, often hermetic, results — all bets were off for Teresa Vittucci and Melanie Jame Wolf. In “Show Business” (30 August to 2 September 2021 at the Sophiensæle) they deploy a full range of tactics from tongue-in-cheek acting and dance, to compelling visual allusions, spoken word, and even singing. They made me grin and laugh, contemplate in awe, and engage in a long after-show discussion with my friends.

“Show Business” unveils its ambitions from its very first seconds. A lush, turquoise curtain hangs across the stage, a spotlight drawing a circle at its centre. A teasing offstage voice personifies us, the audience, as we ask ourselves: “What’s behind that curtain?” What follows is the most compelling moment of the evening: a large, bright red triangle mounted on wheels and with four holes in it appears from behind the curtain to Mars Dietz’s clattering and upbeat music. Vittucci and Wolf hide behind the triangle, pushing it across the stage and then thrust their hands, clad in beige rhinestone-covered gloves, through the holes to move and clap in time with the music. When the performers emerge from behind the triangle, bare-chested and with black wigs covering their faces, they engage in an enticing, swaying disco dance accompanied by scintillating dialogues. After they discuss how they should begin the show, Wolf tells Vittucci: “Let’s just do the end, so it’s over! The whole objective of the scene is to take the wigs off!” This visually startling scene brilliantly resumes the concept of mise en abyme — the inclusion of elements of an artwork inside the artwork itself to recursive effect — and the constant bouncing back and forth between hiding and unveiling that will repeat itself throughout the show.

A string of loosely cut sharp episodes ensues. When both performers clad in Elvis Presley inspired white disco costumes mimic and mumble in the style of a 1970s all-male singing duo, they tellingly deride one of the toxic tropes of endless late-night TV shows — and they make the audience laugh. The show’s finale, in which the performers lie on the floor downstage and croon a song consisting of pop ballad clichés — when you come to tell me, take me in your heart, want you to show me your love — is an amusing yet soothing vignette to which I imagine virtually anyone could relate. Some other techniques used during the show, however, such as pre-recorded applause or placing mirrors in front of the audience, were, I felt, somewhat hackneyed in a performance reflecting on spectatorship.

After the show I sat down with my partner, Cati, and former tanzschreiber writer Annette van Zwoll to discuss the show. While we all agreed that Vittucci and Wolf were stellar onstage and that watching their caustic performance was a sheer pleasure, we found it hard to empathise with them fully. In one memorable solo, when Wolf asked the audience: “You feel good? You’re good?”, one spectator shouted out: “No!” — but Wolf ignored them and carried on with her script: “You feel good! You look good! You work out?” and a few moments later: “You’re here with a strategic boyfriend? You’re here with a ‘friend’? Or with a ‘colleague’?” This scene left Annette and me puzzled. Why was Wolf being so haughty? Or if this were an example of mise en abyme, reflecting a style of one-way address filled with rhetorical questions as used by motivational speakers, then we felt there was a lack of distance between Wolf and the character she was playing to allow us to clearly distinguish between them.

Cati and Annette also mentioned visual references to pre-WWII art: the red triangle and black wigs on the turquoise backdrop reminded them of a 20th century abstract painting; a painted cardboard horse-head that Vittucci wore in another scene made Cati recall surrealist artworks. Wolf also performed a short interlude about an actress named Marlene travelling between Berlin and Vienna, who clearly referenced Marlene Dietrich. These allusions could not be mere coincidence. The pre-WWII era also saw the emergence of political theatre from Bertolt Brecht and Antonin Artaud, to name just two, who for the first time reflected on the fourth wall and its estrangement effects on the audience — questions which are central to “Show Business”.

If I were to take just one quote from this very textual show away with me, it would be Vittucci blurting after her enchanting solo dance: “Gosh, it feels like work!” Art is work, yes! And this masterful and smart (although, I felt, slightly too obvious at times) artwork communicated this simple idea with so much candour that it only gained in political power.